First of all, I want to thank each and every one of you for your encouragement.  I was feeling a little blue last week as I wanted to have accomplished so much more by the time I posted the update.  Your encouraging comments were just what I needed to get back focused on the small victories.  So...thank you!  It has been a good week.

I've shared with you the Green Monster, the Italian Sausage, White Bean and Kale Soup and Jammin Jerk Chicken.  You haven't seen the huge pot of black beans that I made overnight Saturday night... 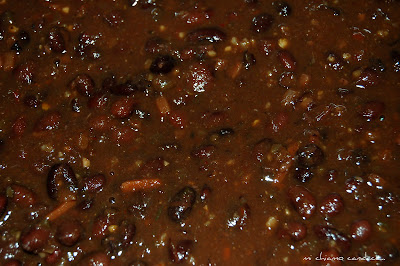 And how I packaged them up into individual packages for dinners this week.... 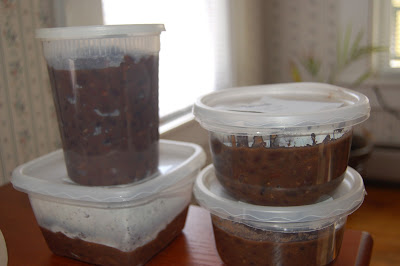 and stored them in our "sub-zero" freezer.... 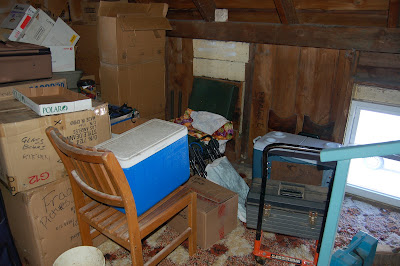 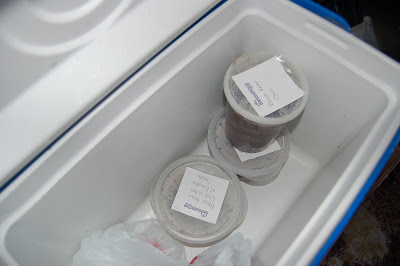 Where in a matter of hours, they were frozen solid and looked like this.....﻿ 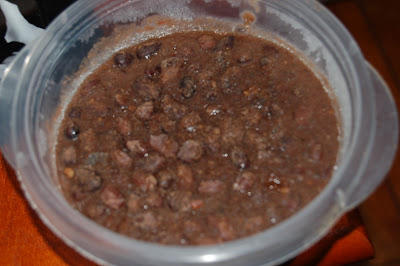 I haven't shown you the Pumpkin Black Bean Enchiladas that I made with some of them.... 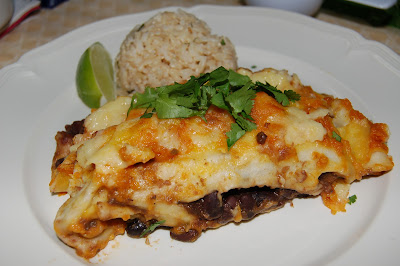 or the Black Bean Burgers that we had tonight.... 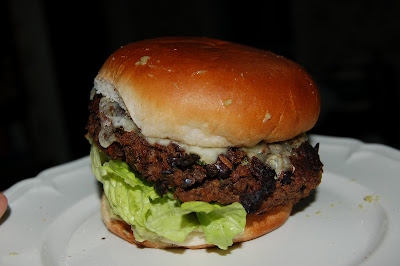 Both of them were new to us recipes and both of them were absolutely wonderful!  Those are two virtually meatless meals this week for us.  I say "virtually" because in that huge pot of beans, I did saute a little bacon and add it to the pot.  That's 1/4 of a cup to a pound and half of dried beans....not a lot! 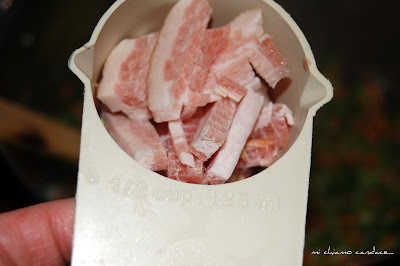 I haven't showed you the salads that I've made for lunch... 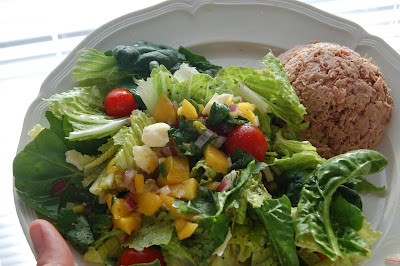 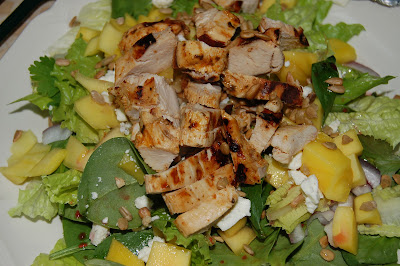 or the Purple Monsters that I've had for breakfast... 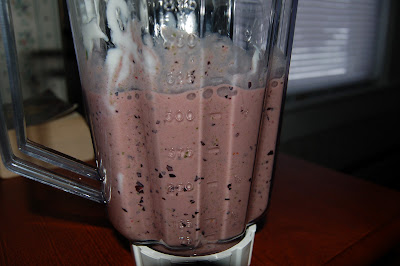 Those are some of the good choices that I've been making.  Along with those yummy meals, I made some amazing banana muffins that Mary at Life in a Small Town gave me the recipe for. 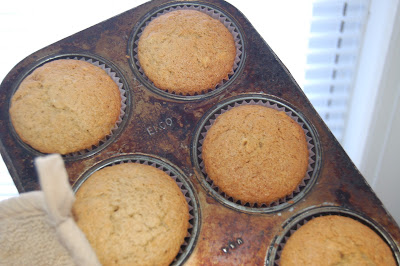 While they were full of sugar and carbs, they were made from scratch and not a mix so I count that as a small victory as well.  I, also, didn't eat but one of them.   David came home just as the muffins were coming out of the oven.  This photo was taken about fifteen minutes later.... (I checked the clock!) 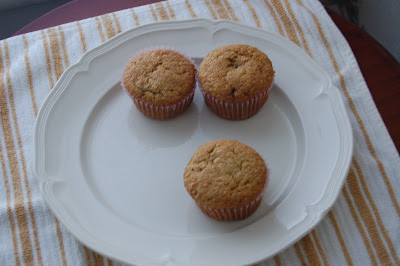 And right after I took the above photo, I snapped another.... 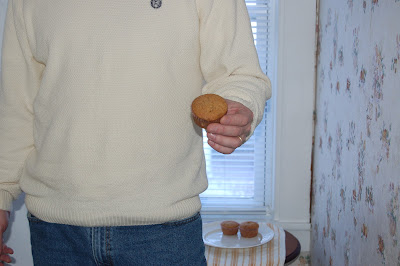 Yes, they were that good.  I really should share that recipe with you.  Thanks, Mary!  That's twice you have hooked me up recently with wonderful recipes.

Since we have moved, there has been a whole different feeling with how we are living and shopping and eating.  For many years, I've passionately read about nutrition and food and tried my best to make good choices regarding the food that I put on the table.  We haven't always made good choices and have had times of backsliding like crazy; but for the most part, I've tried to do the right thing.  Even with making good choices to eat lean meat, low fat dairy, whole grains and vegetables, there has been some serious room for improvement.  I've had to ask myself some serious questions lately such as:


"Where does the meat that I buy come from?"
"Were the animals raised humanely?"
"Were they allowed to roam free?"
"What kind of diet were they fed?"
"Were they given antibiotics and growth hormones?"
Since I've been in New England, I've been thinking about these things as I've purchased the meat for my family.  I've found that there is a better selection of meat that comes from animals that were allowed to roam free....animals that were vegetarian fed....animals weren't given antibiotics or growth hormones....and I've been trying to purchase meats that fit that criteria.  Those particular meats are more expensive than the other meats sold in the market.  Consequently, we are eating less meat these days as evidenced by some of the meals that I've shown you above.  I know that even with taking all of that into consideration that there is still room for a lot of improvement.  I don't know under what circumstances these animals were butchered and processed.  Even if they are raised humanely and under the healthiest of conditions, there still could be serious issues with the way they are butchered and processed.  I could find sources locally and investigate the processing a little deeper and I hope to do that in the coming year.   These are all small changes that we've been making in our lives and it feels good.

I've been buying more fresh vegetables since I've been up here.  The selection is so much better than it is in Louisiana and  I've been able to find some really good deals lately in the mark down bins.  I've grabbed the deals where I have seen them  and taken some steps to put them away for future use.... 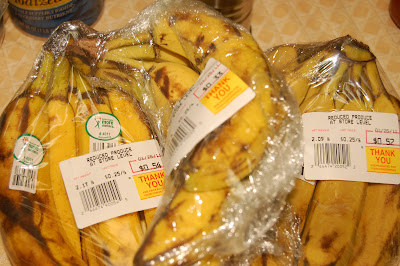 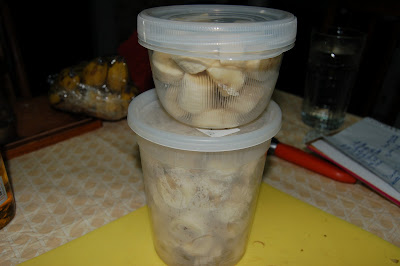 I peeled and cut up two bunches of these bananas for future Green and Purple Monsters.  I'm seriously loving those for breakfast these days.

I found two packages of these beauties at the market the other day and I knew they were mine.  I wish they had been Romas but I'm going to make them work... 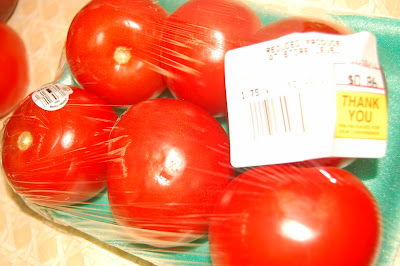 I cut them up and roasted them in my little convection toaster oven with a drizzle of olive oil and freshly ground sea salt... 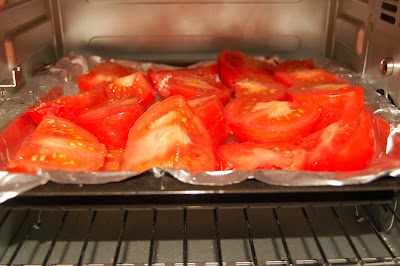 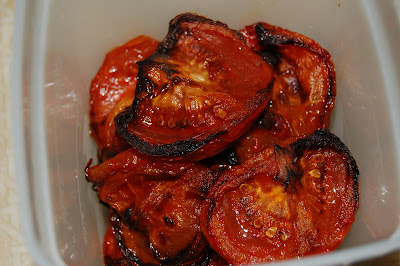 I put these away in the "sub-zero" to be used in future pasta dishes or chili.....that is if I can keep my hands off of them.   I literally could eat every one of them by themselves.   We use a lot of canned tomatoes around our house; but I've become increasingly concerned with BPA in cans.  Prevention Magazine said in this report that canned tomatoes are the worst offenders.  I'm going to try to only use fresh from now on unless I can find tomatoes in jars.  As of right now, I have not been able to find those in the supermarkets where I shop.


So even though I've been making good choices and I'm very pleased with the direction we are going, there is room for improvement!   More of the fruits and vegetables that I purchase needs to be organic; but it gets really expensive really fast to do that.  I ran across a link to the Environmental Working Group's Shopper's Guide to Produce while visiting Sarah over at Semi-Sweet and it lists the "Dirty Dozen" to watch out for along with the "Clean 15" so that you can make better decisions on the produce that you buy.  You can find that guide here.

As the weather warms up and the growing season begins up here, I will have access to more local, organic food that should be less expensive than that offered in the supermarket.  My mother-in-law has a garden every year and I hope to be able to grow a few things in containers myself.  I look forward to having fresh herbs again.   We have discussed potentially having a community garden and I really hope that works out.  The growing season is shorter up here but it will be a lot more pleasant to garden in this climate than it is to garden in Louisiana.

Another way that we have changed our lives is through recycling.  I've used cloth shopping bags for awhile now....when I remember to bring them with me, that is.  Recycling has been something that I have been wanting to do for some time now; however, the recycling centers were very limited where I lived in Louisiana.  I could recycle newspapers and soda cans and there was a place to bring plastics such as water bottles and we did that; but, there were so many other ways that we could have recycled if there had been facilities available to accept them.  Since we have moved, our landlord takes care of the trash removal here but he requires us to recycle.  No problem!  We recycled some of our moving boxes and used them to set up an area to hold our recycling.  We not only recycle newspapers, soda cans and plastics....but we recycle glass bottles and cardboard and other heavier plastics, as well.  It feels really good!  Now if I could remember to bring the cloth bags with me to the market every time that I go, we wouldn't have to bring the plastic shoppings bags to the recycling bins at the market!

When I look back at how things have changed since we moved up here the week of Thanksgiving, I am amazed that it's only been two months.  The last quarter of 2010 was a whirlwind and our lives were completely turned upside down.  With all the changes in our lives, we have made a conscious decision to simplify our lives and live in the present.  Life is meant to be lived...not endured!  And we are celebrating all of these small changes...one decision at a time.

Thanks so much for sticking with me through this very long post.  I have found it difficult to keep up with blogging about all of this since I've been so busy lately.  I hope this post catches you up.

Have a great weekend, friends!

This post is linked up to:  Project 2011, Fresh Clean and Pure Friday, Follow Friday- 40 and Over and Boost My Blog Friday. 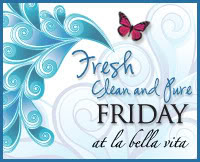