Hey Friends!
I hope you have had a wonderful weekend.  My parents left this morning and I have not done anything more adventurous than laundry today.  I've read some blogs and napped and finally gotten around to watching my dvr'd episodes of the new season of THE CLOSER.  We just had a nice dinner of steak, tiny new potatoes and corn on the cob....all prepared by my wonderful husband on the grill.  He waited until it cooled off outside a tiny bit before starting it.
Speaking of cooling off outside... 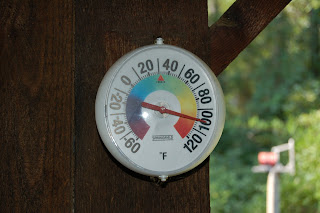 It has been BRUTALLY HOT outside the past couple of days and today is no exception.  David took this photo at 5:30 pm today on our back porch....in the shade!

This next week is supposed to follow suit.....
Fall, where are you?  You are definitely welcome to make an appearance any day now....better yet, just go ahead and bring on winter.  I'm more than ready!!!
So on to more important issues....today is Day 3 of the 30 Day Blog Journal and today's topic is FAVORITE TV SHOW.  I've given this lots of thought since I saw the topic.  I am a huge fan of AMERICAN IDOL and  THE CLOSER, THE NEXT FOOD NETWORK STAR and DESIGN STAR and I absolutely love football season!
I am looking forward to the new television show coming on Food Network called "THE GREAT FOOD TRUCK RACE".  I think it would be pretty cool to own a food truck.  I have some menu ideas that would work if I knew anything at all about running a restaurant.  One of my favorite blogs that I read is TRAILER FOOD DIARIES  about the underground food scene in Austin, Texas.   A number of them are housed in AIRSTREAMS retrofitted with commercial kitchens.  How cool is that?!  That would be even better than a "food truck"!
Of course, being someone who loves to laugh, I think I have seen every SEINFELD episode ever made and to this day, I can still watch them over and over again and still laugh.  What was it about that show? It truly was a show about nothing; but, it was hilarious!
Nothing has ever moved me like THE CLEANER on A&E TV.  I was so sad that they took it off of the air.  It was really pretty dark since it was based on a real person, an interventionist, dealing with real life issues that nobody likes to talk about - Substance Abuse - and how it wrecks people's lives and the lives of their families.
The methods shown on this show were definitely controversial.  While it was impossible for me to get through an episode of this show without crying, I could not stop watching it.   William Banks, the main character of the show, played by Benjamin Bratt played a recovering addict who made a deal with God when his daughter was born that if he could get have another chance that he would work to help others break free from their addictions.  He had a small team of recovering addicts that he had helped in the past to beat addiction that worked with him to help others break free from their addictions.
What I love about this show and what moved me most of all is how William Banks got so real with God on the show.  You catch a glimpse of his relationship with the Lord.  This show had nothing to do with church as we know it and everything to do with a real man with real problems navigating life with the help of a real God.  His life was far from perfect.  He struggled with the same fears and frustrations that we all deal with - our humanity.   He had problems with his wife and kids that stemmed from the bad seeds he had planted over the years and his dedication to live up to his end of the bargain with God and the calling of God on his life to help others.
He was far from your typical minister of the gospel yet he shared the love of God by compassionately helping others beat their addictions through whatever means necessary.    I guess this show never took off and became popular.   I know I didn't discover it right away and came in after it had been on for awhile; but once I watched it the first time, it was like a train wreck.  It broke my heart and moved me to tears when nothing else could yet I couldn't stop watching it.
Take a peek at this video and listen to this beautiful song.
Hope you have a great week, my friends.