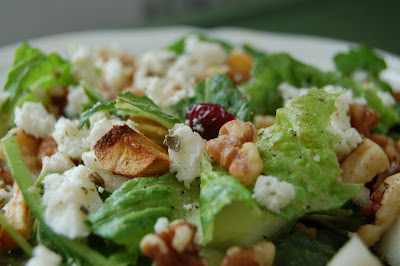 I have been craving a salad made with fresh pears. While outside on the deck repotting plants this morning, my plan to have salad for lunch was born.  I have some of the cutest baby mesclun lettuce growing out there and in my fridge I had some organic baby spinach, romaine lettuce and pea shoots. My landlord gave me a few fresh parsnips so I cut those up and roasted those in the oven with olive oil and sea salt before I went out to work with my plants. I originally thought that they would make a nice snack since it was just a few of them. While dreaming up my salad, I thought....why not add the parsnips to the salad too?!
I knew that I had a fresh red pear.....some dried cranberries.....some walnuts that I could toast.....some of that wonderfully yummy NH herbed goat cheese that I've managed to develop an addiction for.  My lunch plans were assured.
After finishing my plants, it was time to search for a salad dressing recipe.  I was thinking something with that yummy Ben's NH Maple Syrup so I popped into Google "maple syrup salad dressing pears".  They were going to be the star of this show.....or so I thought.  I found a wonderful recipe at culinarycory.com and I'm all set.

So I tossed the greens together....

3/4 cup olive oil
1/4 cup cider vinegar
1/4 cup maple syrup
2 tbsp. Dijon mustard
1 tbsp. garlic, minced
pepper to taste
In a small mixing bowl, whisk all ingredients until well emulsified.  The dressing should be a light yellow color. Keep vinaigrette chilled in the refrigerator until ready to toss with the greens.
Note:  This makes a good bit of dressing....enough for a large salad to serve 4 to 6.  I just spooned some out for my greens and I'm saving the rest in the fridge for a later salad.

I dressed the greens with some of the dressing and refrigerated the rest for later.  On top of the greens, I added the roasted parsnips, dried cranberries, a chopped red pear, a small handful of walnuts that I toasted in a dry skillet and that yummy goat cheese.
Absolute.perfection.
You might note, as culinarycory did on his website, that you will probably want to treat your pears with fresh lemon juice until all of the cut sides are coated so that they don't turn brown.  I didn't do that, as I only made enough salad for one and I ate it right up.  No time to turn brown on my salad!

Thanks so much for stopping by to see me today.  It's a beautiful day in New Hampshire so I'm off, once again, to enjoy it.

Have a great day!

This post is being linked up to Let's do Brunch, Whatcha Makin' Wednesdays
and Full Plate Thursday.