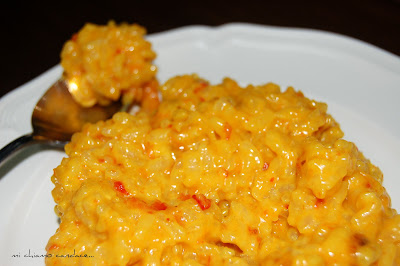 I found baby red and orange peppers in the markdown section of the grocery store and had to pick them up.  I suppose if the grocery store had marked them at a decent price to begin with, they would not have had to mark them down to sell them.  Oh well....bonus for me, right?
I bought them with the intention of roasting them and putting them away in the freezer for soup or chili so I didn't take any photos of them before I roasted them.  I really should have taken some photos even if I hadn't planned on doing anything special with them because they were so beautiful.  Lesson learned.  After they have cooked, they are not beautiful....but they smell incredible. 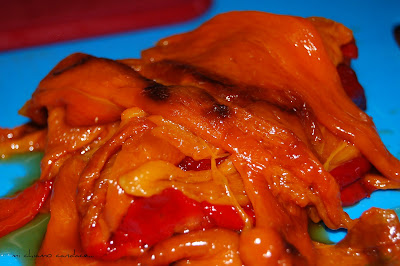 While these babies were roasting and smelling so good in the oven, I remembered that I had read a blog post here about a risotto made with roasted peppers.  I, also, remembered that Pioneer Woman had posted about making risotto with red peppers that intrigued me when I read it so I did a quick search for that recipe and found it here.  I took some ideas from Pioneer Woman....some ideas from Running Mama Cooks and some ideas from my "go to" risotto recipe created by Giada and this risotto was born. 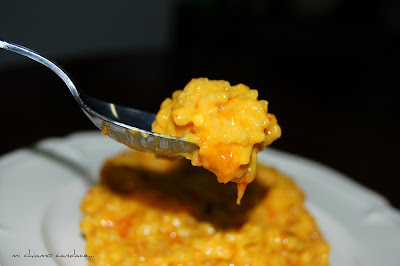 I hope you enjoy it as much as we did.

Salt and Pepper, to taste
Heat the broth in a pan and keep it hot on the stove. Sauté onions in olive oil and butter until translucent. Add garlic and sauté. When garlic is softened, add rice, stirring constantly until the rice starts to turn a light golden brown. Add wine, stirring continuously. Stir in the roasted peppers with the juice.  As the juice and wine evaporates, begin adding hot broth one ladle at a time, stirring continuously as the rice soaks in the liquid and gets tender and creamy. Stir in turmeric. Add the cheeses and mix completely until the cheese is melted and incorporated into the risotto. Salt and Pepper, to taste.

**To roast peppers, I rub them with olive oil and place them on a foil lined baking sheet in a 375 degree oven, turning every 20 minutes until charred on all sides. I let them cool and remove the stem and the inside seeds. The skins peel right off very easily. I run them lightly under water to get any remaining seeds off of them.


This recipe is being linked up with Hearth and Soul Hop, ﻿Delectable Tuesday, Tuesdays at the Table and Ruby Tuesday. 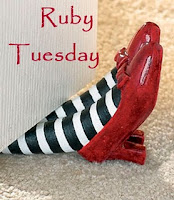