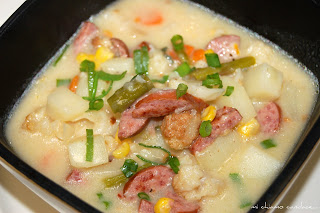 What can I say?
We love food around here.

When it's rainy and cool, there is nothing better than a steaming bowl of chowda.  This one delivered.  It all started with a post about German Sausage Chowder that I read here at Cooking Creation, a blog that I've only recently discovered.   If you haven't been over to visit Celeste at this blog, you need to hop over there and say hello to her.  She has some really yummy food featured over there.

Not only did her chowder sound good to me, it looked even better.  The photo was "pin worthy"  (Have you checked Pinterest out yet?  If you would like an invite, send me a message with your email address and I will hook you up.)   Sadly, I knew that I would never be able to make it the way that Celeste did because her version contains cabbage.  I would have loved it; however, other than the occasional eggroll or coleslaw, my husband won't eat cabbage.  Because of his cabbage aversion, I was going to have to modify it into some sort of chowda inspired by the hers.   The sausage part really intrigued me.  I don't know what kind she used; but, I had some turkey kielbasa in the fridge that worked for me.  I, also, had some leftover roasted cauliflower and roasted asparagus that begged to be put in there too. Cauliflower kind of has that "cabbage-y" smell to it and my husband doesn't feel the same way about it as he does cabbage so we were good there.

By the way, have you ever roasted cauliflower?  A drizzle of olive oil and a sprinkle of sea salt over the top and into a 450 degree oven until golden brown and tender, turning occasionally and you will have the most amazing cauliflower ever.  Seriously.  It's so easy and so good that way.  We do asparagus the same way.  Love it.

Anyway...moving on...I knew the cauliflower would add a level of flavor to the soup that wouldn't be there otherwise and make a nice substitute for cabbage.  The leftover asparagus was begging to be used. I didn't have much of it; but chopped up and thrown into the chowda, it added another level of flavor when you were fortunate enough to get a bite of them.

I had a handful of sad little baby carrots and celery that I diced up and threw in along with  a minced fresh jalapeno,  some chopped red potatoes, and a very small little portion of leftover carnitas (which I need to tell you about soon!).  I used frozen corn in my chowda along with a cup of Cabot Seriously Sharp Cheddar Cheese and a cup of freshly grated Romano Cheese (because that's what I had!).   My fresh lemon thyme made an excellent seasoning along with the cayenne pepper.  I left out the parsley altogether  because I was too lazy to climb behind the zucchini to harvest it; but, we did crown the top of each bowl with some chopped green onions.  Delicious! 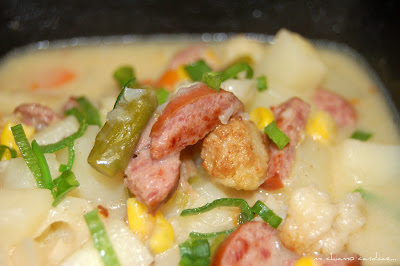 I hope wherever you are that you weren't affected by the wrath of Irene.  If you were, my thoughts and prayers are with you.  At our home, we had a few leaves off the trees and maybe a limb or two.  All in all we had a beautifully, rainy and cool day with no problems.  David and I snuggled on the couch (sorry if that's too much information) and watched a Mad Men marathon.

We have been living in a cave.  We had not seen it before and started the series from the beginning on Netflix.  It's basically a "soap"; but, I am intrigued by the time period and it is sadly interesting to see how wrongly women and the African American race were viewed and treated back then.  This was before I was born so I missed it.  In some ways, things have changed and in some ways, I know that they really haven't.  Even though there have been some improvements over the years, sadly, there have not been enough.  That's another blog post though and one that I doubt I will ever write.  I try to keep it much lighter on here.  Moving on....David and I are such geeks.  I think our favorite part is seeing all of the retro props that they have on there.  Awesome.

Even though we made it through unscathed here at mi casa, the town that I live in didn't.  It could have been MUCH worse; but we did experience some flooding in town and in the surrounding communities.  The Sugar River is expected to crest this afternoon so I'm praying that it won't be too bad for those living near it.  We got out and about yesterday to see what was going on and I thought I would share a few photos with you. 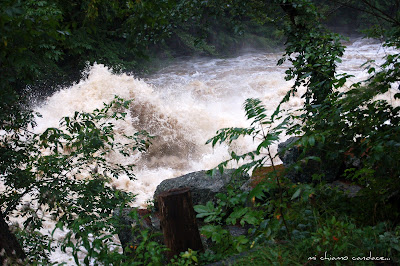 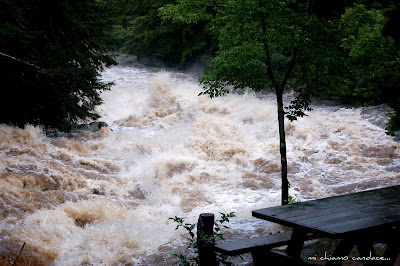 I wish we had thought to have brought our Flip because these photos do not do these scenes justice.  You really should have heard the sound of that water rushing by to get the full effect.  Everyone was down there with their cameras in hand.  It was quite the event. 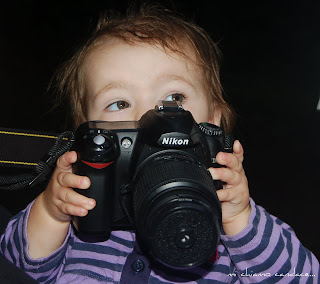 Even Monkey had to get in on the action.  She's been watching her Mommy carefully, can you tell?  She's almost ready for one of her own. 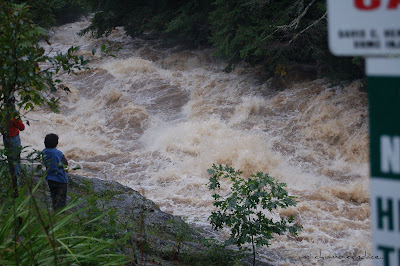 In my opinion, those people were way too close to that water.  I could see it quite well from where I was standing.  I felt it completely unnecessary to get a closer view.

And personally, I think that the people in the next photo had some serious risk issues.  The water was right at their feet.  I told my mother-in-law that perhaps we should photograph them just in case they didn't make it.  Morbid, I know; but, it was scary, people.  Seriously.  We read about tragedies like this every day where people dare to go where they shouldn't.  If these two guys are, by chance, reading this (doubtful),

David and I were down at this very place last spring and I posted some photos of what it looked like  at that time here.  If you scroll down to the photo of our Kelly Moore bag sitting on the rocks, that photo and the next one were taken at this place.  Those rocks were not visible yesterday.  They were under the torrent of water rushing through.  Sobering.

The town experienced some flooding, as well, with the storm.  The water had to go somewhere, right?  The park where we take Monkey to play got some water.  It was rising the whole time that we were there.  My stepdaughter got a photo of this sign when we arrived and then snapped another one later and compared them.  You could tell by looking at the photos that it had been slowly rising.  There was a definite difference and we were not there very long. 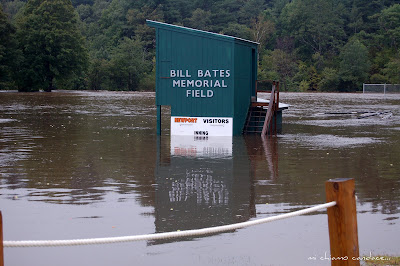 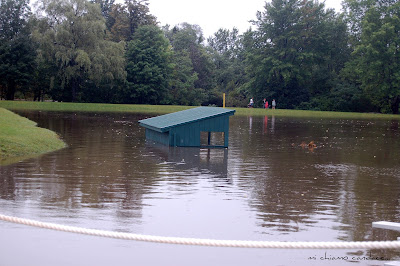 Have camera. Will travel. 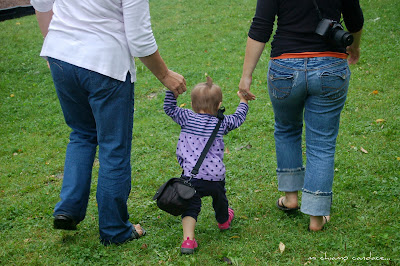 Thankfully the playground was not underwater and hopefully it won't be after the river crests today.  Miss Monkey got a chance to ham it up on the hippo and we were able get 47 a few pictures, of which, I will only make you look at one. 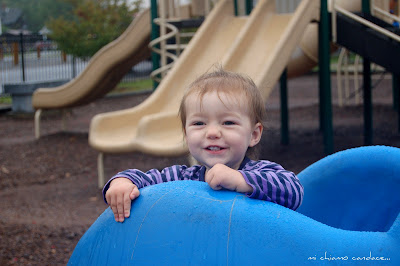 The town, itself, suffered some flooding which made it necessary to close some of the streets in town. 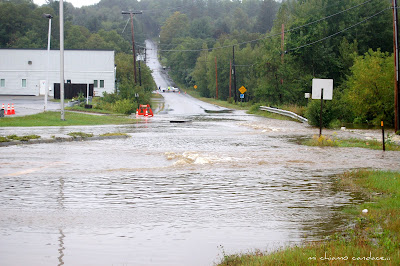 Including one section of one of the main roads leading out of town.  That section includes the McDonald's and the Dunkin.  Thankfully, if the residents can take other routes, they can get their Dunkin fixes in about 100 several other locations nearby.  New England runs on Dunkin, ya know? 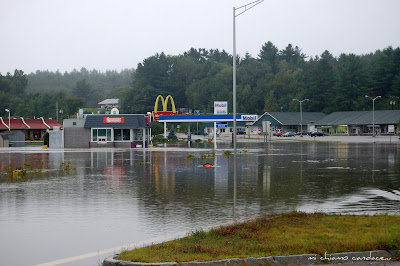 If they would only learn to make a Chai Tea Latte, I might run on Dunkin too.

So that concludes this episode of "Life, as I know it".  I am seriously not loving Blogger today as this is the second of these posts that I've had to compose today.  Apparently, my clicking on "save" earlier this morning did no good and nothing was saved.  Grrrr!   I just did preview a few minutes ago and this post looks nothing like it should.  What is up with that?  I wasn't going to rant about my Google issues and I'm still not; but I'm going to leave you with this.  If you get an Anonymous comment on your blog from me, it is because it won't let me post a comment otherwise.  Sometimes it works fine....sometimes it doesn't.  I try to post my name and my blog site in the comment NOT TO BE ANNOYING or to make you think, I'm asking for a return visit.  I'm doing that so that you know that it's me commenting.  Seriously, it is getting a little old.  I apologize for any confusion.  I am thinking that I'm going to save the necessities on this laptop, wipe it clean and start fresh.  Maybe some of it is my computer and compatibility issues.  I don't know.  I'm grasping at straws here.  A fresh start can't hurt though.

Thanks so much for visiting and sticking with me through this post.  Please remember to keep the victims of Irene in your thoughts and prayers.  We made it through okay; but it will be a long time recovering for some.  I'm going to see if I can repair this post into something that looks reasonable and publish it and then I'm going to do a few things before Miss Monkey comes to play this afternoon.  Did I tell you that I'm loving living up here?  Getting to be closer to some of the kids and getting to know that precious little girl has been priceless.  That's what it's all about, you know?

Have a beautiful day!