I've been meaning to share this wonderful recipe with you for awhile now and I've been so busy that I haven't had the chance to do that.  I was able to find a butternut squash in the markdown section of the local supermarket. I'm not sure why it was there. 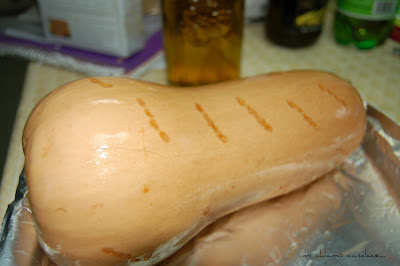 I had some beautiful sage and my original thought was to take the sage, brown some butter, roast the squash and maybe mix it with pasta. I'm not a huge pasta fan; but, I am a huge risotto fan so I decided to see what I could find in the blogosphere for recipes using those ingredients.
Butternut squash is not the easiest veggie to work with or at least it's not for me.  It's hard to cut and hard to peel.  That's where the genius of other bloggers come in to play.  After a doing a search for recipes, I found the blog Stephen Cooks! here.  I am daily amazed by you guys and girls out there.   I learn so much from other bloggers.  Stephan shared a wonderful way to prepare the roasted squash....
"Prick the squash all over with a fork, rub it with olive oil and roast about 1 hour 15 minutes in a 400º oven until a fork penetrates easily to the center. Allow the squash to cool and cut in half. Remove seeds and pulp and scoop the meat out into a bowl. Set aside. (This can be done and refrigerated at least a day ahead if you like.)" 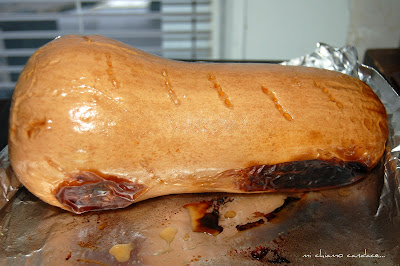 I tried it just as he suggested and it worked beautifully.  I don't think I will ever cut and peel a raw squash again.  The squash was nice and tender and easily peeled and chopped.  I wanted a little more caramelization on the squash for flavor so after I had the squash chopped into pieces.  I spread them on a baking sheet, drizzled them with olive oil and sprinkled a little sea salt on them to try to get a little more flavor out of them. 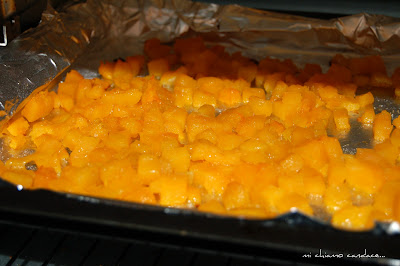 I don't know how well that worked for my original intention.  They really didn't caramelize at all.  I could have sprinkled some brown sugar over the top and that might have worked but then they would have been too sweet, I think.  The end result was awesome so I don't know that it would have been that much better if the pieces had actually caramelized.  My cooking is always trial and error.  Sometimes it works....sometimes it doesn't....sometimes when my original ideas don't work, the end result is fabulous anyway so whatever, right?
David fried up some bacon for me.... 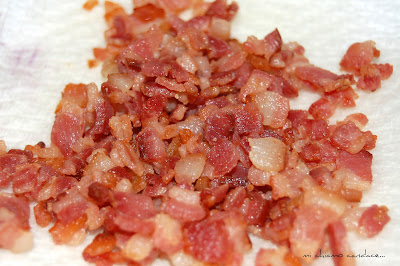 And he fried the sage leaves.... 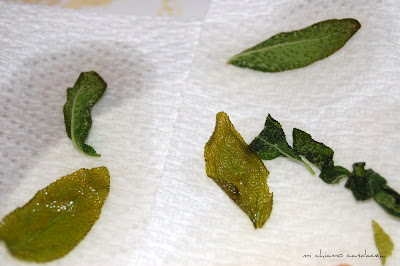 We didn't have any shallots like the recipe called for so we used a purple onion or red onion...whatever you like to call it.  When you peel the skin, the onion itself is purple.  We chopped the onion and sautéed it in olive oil.  Once the onion was soft, we added the rice and sautéed them together until the rice was a nice golden brown.
The recipe called for mixing the wine and broth together and heating them up.  I happen to think nothing smells any better than when the wine first hits the pan so I wasn't willing to sacrifice that for the recipe.   Once the rice was nice and toasty, the wine was added and stirred into the onion and rice mixture until it was absorbed.  Oh that smell......
I.love.it. 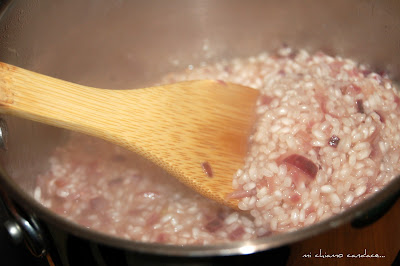 Ladle by ladle the hot broth was added until each were absorbed by the rice mixture. 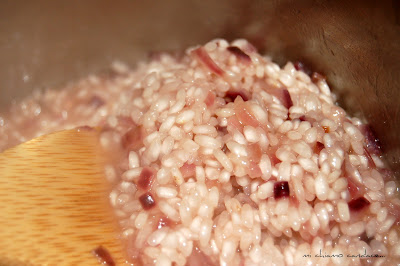 Once the rice was was tender and creamy, we added half of the bacon and half of the sage leaves and some of the roasted squash.  We stirred in freshly grated parmesan cheese, salt and pepper, to taste, and garnished the top of each serving with bacon and fried sage leaves. 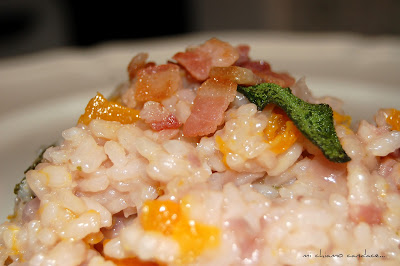 It was absolutely fabulous!
Butternut Squash Risotto with Bacon and Sage
Adapted from a recipe from Fine Cooking here


1-1/2 cups arborio or other risotto rice, such as carnaroli or vialone nano


Combine the chicken broth and wine in a small saucepan and set over medium heat. In a medium (3-qt.) saucepan, heat the oil over medium heat. Add the sage leaves and fry, turning once, until they’ve turned dark green in most places, about 1 minute total. Don’t brown. With a fork, transfer to a plate lined with paper towels to drain. Put the bacon in the saucepan and cook, stirring occasionally, until nicely browned, 5 to 7 minutes. Transfer the bacon to the plate with the sage.


Add the shallots to the saucepan and cook, stirring with a wooden spoon, until softened, about 1 minute. Add the squash and rice and cook, stirring, for 1 minute. Ladle in enough of the hot broth mixture to just cover the rice. Cook, stirring frequently, until the broth is mostly absorbed. Add another ladleful of broth and continue cooking, stirring, and adding more ladlefuls of broth as the previous additions are absorbed, until the rice is tender with just a slightly toothsome quality, about 25 minutes. As the risotto cooks, adjust the heat so that it bubbles gently. The broth mixture needn’t be boiling; it should just be hot. If you use all the broth and wine before the rice gets tender, use more broth but not more wine. Set aside the nicest looking sage leaves as a garnish (1 leaf per serving). Crumble half of the bacon and the remaining sage leaves into the risotto. Stir in the Parmigiano. Season to taste with salt and pepper. Crumble the remaining bacon over each serving and garnish with a sage leaf.
Thanks so much for stopping by to visit!  If you haven't entered to win my first giveaway, there's still a few hours left.  The giveaway ends on April 1st at 12:00 noon EST.  Don't miss the chance to win some Real New Hampshire Maple Syrup and other goodies!  You can enter to win here. 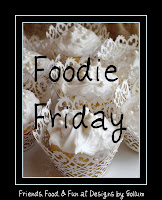