I think I have mentioned in the past that David's stepdad is allergic to many things such as apples, potatoes, tomatoes and chocolate, just to name a few.  Because of his allergies and because he loves to cook and loves good food, he has had to be very creative in the kitchen. The family has definitely reaped the benefits of his creativity.

Colcannon is one of the recipes that he has successfully adapted.   He shared that this recipe is sort of a combination between colcannon which is Irish or rumbledethumps which is Scottish and clapshot which is also known as "neeps and tatties".  Whatever.... It's delicious! 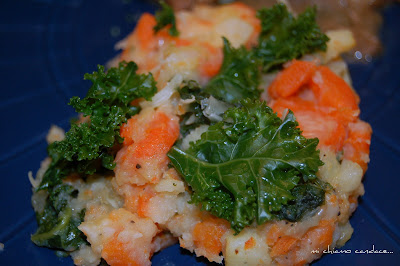 When I decided to make this recipe to serve alongside the Guinness Pie, I adapted it even further to use what I had available.   That is the beauty of this recipe.  It can definitely be adapted and changed up to suit your tastes and what you have onhand.  This time, I didn't have turnips so I used potatoes and parsnips instead.  I boiled the veggies with garlic cloves, and, also, seasoned the mixture with onion powder and garlic powder to further enhance the flavor.  It was delicious.
So without further adieu, I give you...


Preheat oven to 350 degrees.  Boil or steam the carrots and the turnip until done.  Drain well and turn into a large bowl .  Add the butter, 2 Tbsp. cheese (if you are using), salt, pepper and nutmeg and mash well.  Fold in the chopped cabbage or cooked kale, chives or scallions and mix well.   Turn the mixture into a baking dish and top with the remaining cheese and bake for 20 minutes.


Thanks so much for stopping by...

Email ThisBlogThis!Share to TwitterShare to FacebookShare to Pinterest
Labels: Colcannon