Just in time for St. Paddy's Day, I am sharing a recipe from our family cookbook.  I've seen stew recipes being shared like crazy in recent days and lots of them contain Guinness.  I have yet to see one exactly like this one though.

This recipe is courtesy of David's stepdad. It's always a treat to be invited over to their house for dinner. The food and the company are always amazing. This was the first time that we attempted to make this at home.  It definitely will not be the last. 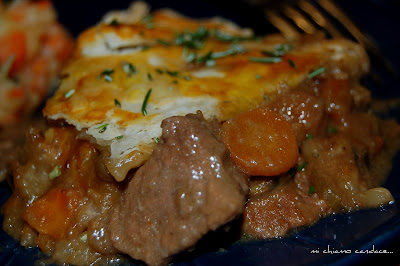 Preheat oven to 375 degrees.  Place 2 Tbsp. butter or oil in a Dutch oven and cook onions and garlic until soft, about 10 minutes. Add the remainder of the butter or oil, carrots, celery and mushrooms.  Cook until the moisture released by the mushrooms has evaporated, about 15 minutes.

Season the meat with salt and pepper.  Add the flour, rosemary and meat to the pot and cook on high heat for 5 minutes.  Add enough Guinness to cover the meat.  Cook in the oven, covered, for 1 1/2 - 2 hours.  Stir occasionally.  Remove from oven.  If broth is thin, reduce it over medium heat.  Season to taste and fold in half of the cheddar.  Pour the stew into a baking dish or pie plate.  Place the pie crust over the stew. Slash the center and brush with an egg wash.  Sprinkle the remaining cheese over the top.  Bake until crust is puffy and golden.

Today marks the end of my vacation and it's back to work in the morning.   I did not accomplish everything that I wanted to during my time off; but, I have to say that this was one of the best vacations that I've ever had.    I had hoped to blog a lot during my time off and take some photos and neither of those things happened.    That's okay though.   I'm rested and relaxed and ready to begin again.

Thanks so much for stopping by.  I hope you have a wonderful week.