Inside Out Pork Dumplings

Dumplings and potstickers are some of my very favorite things to eat when we go for Asian food.  I literally crave the flavors in them.  I've tried my hand at making them at home and was not successful.   I couldn't get them to seal properly.  I think I stuffed the wontons too full.   It was a huge mess and it hasn't been something that I've been willing to try my hand at again. 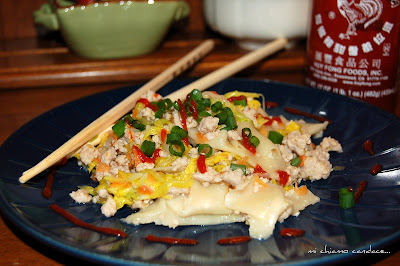 When I saw this recipe in a copy of Whole Living magazine that I got from my mother-in-law, I knew that I wanted to make it.  It had all of the ingredients and flavors that I love without all of the fuss of trying to make the little dumplings.  Even though we basically quadrupled the ingredients, I didn't quadruple the amount of dumplings in the recipe.   The dumplings were a little tricky as you are supposed to cook one wonton at a time in boiling water for a minute.  That was just way too tedious for me.  I added more than one to the pot and just kept them moving with a pair of tongs.   I just used the amount called for in the recipe which I, personally, think that were enough.   By that time, I was definitely ready to eat.   I couldn't find baby bok choy so I used a head of napa cabbage.  We decided to use rice wine vinegar instead of white vinegar; but since we were quadrupling the ingredients, I didn't have enough.  No problem!  We had a bottle of Sake so we used half rice vinegar and half Sake. 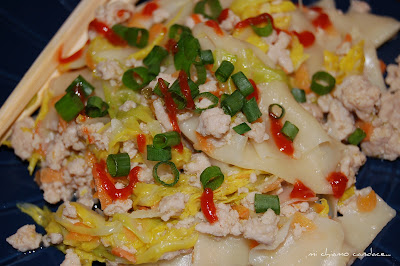 The flavors were delicious and everyone loved it.    The addition of sriracha and a drizzle of soy sauce made it even better.  I am quite sure that this will be a recipe that we will make again and again.  I think that next time I will forego the wontons and serve it over some forbidden or red bhutanese rice with some chopped, toasted peanuts on top.  Yum!
You can find the recipe here at Whole Living Magazine.
Thanks so much for stopping by,

Email ThisBlogThis!Share to TwitterShare to FacebookShare to Pinterest
Labels: Inside Out Pork Dumplings