THE POTATO HAM GALETTE WAS UPSTAGED...

by the one that I made tonight. 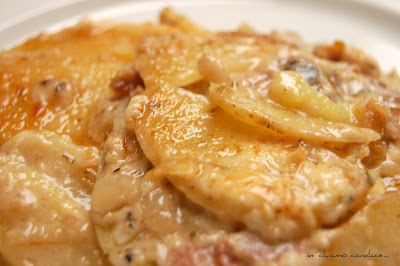 The potato and ham galette that I shared with you last night was delicious. It was warm and comforting and oh so tasty.  David loved it. I loved it.  But....


You knew that was coming, right?

The first thing that I wanted to change was the sauce.  The sauce last night was thin.  I wanted a thick and creamy sauce.   I, also, wanted some spice and by spice, I mean heat.  You know how we are around here.

Thankfully, David had gone into a potato slicing frenzy last night and had sliced way too many potatoes for last night's galette.  I had leftovers that begged to be used.  So I sautéed some chopped bacon, reserving a tablespoon of the drippings.  To those drippings, I sautéed chopped shallots, garlic and a jalapeño, which was not spicy at all, by the way.  You just never know with peppers.  Once they were browned nicely, I added a tablespoon of flour, and made a light golden roux.  Wine would have been my liquid of choice to add next but I didn't have any so I added some water first and stirred to make a gravy.  I reduced the heat to low and added a cup of half and half, 3 ounces of goat cheese, a tablespoon of chopped fresh rosemary, a teaspoon of nutmeg, salt, pepper and because the jalapeno wasn't hot, I added some cayenne.    That did the trick. 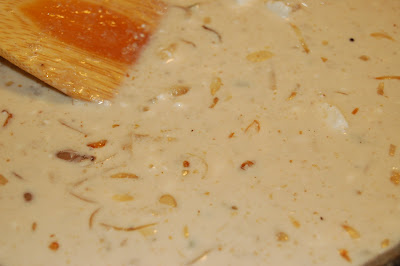 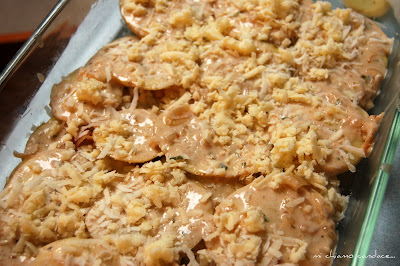 ...sauce, potatoes, bacon, grated sharp and romano cheese and repeat.  I ended it with sauce and topped  the whole thing with grated cheese.  I covered it loosely with foil, popped into a 425 degree oven for an hour, uncovered it and popped it back into the oven for an additional 15 minutes to get toasty. 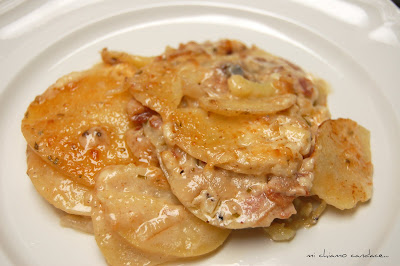 Tonight, I can rest.
This was the dish I had dreamed about.

Have a great weekend and thanks so much for stopping by!