The recipe featured served as an idea for me as I didn't have the spices called for and cutting the chicken into kabobs seemed like a lot of trouble.  I had spent the morning in Vermont with my sister-in-law and my afternoon was spent playing with Miss Monkey so getting dinner on the table as quickly and easily as possible was my goal.  I really don't think I had skewers for kabobs anyway and besides, I made a recipe like it was written once recently.  That should count for something, right?  I sprinkled the chicken with salt and let it sit in the fridge for 30 minutes while I checked out your blogs.   Once the chicken was ready, I grabbed the Smoky Paprika Chipotle Seasoning, Sugar and the package of bacon. 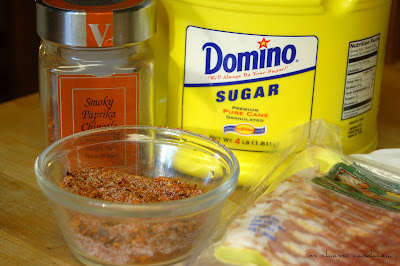 The smoky paprika chipotle seasoning was mixed with the sugar and... 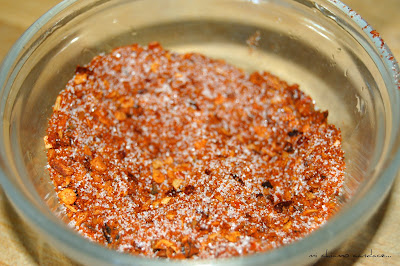 The bacon was pureed in my mini chopper.   It took a few turns to get it all chopped up; but my little mini chopper did the trick. 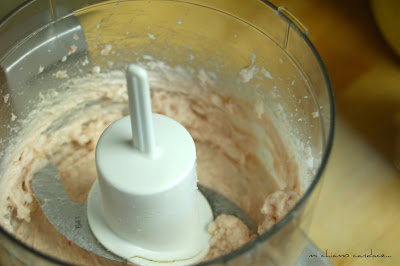 It certainly didn't look very appetizing; but, I knew that it was going to be delicious.  I spread the bacon on both sides of the chicken and sprinkled them with the spices. 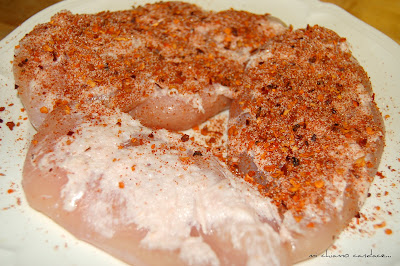 Once the chicken was coated, I placed them on the grill until they were almost up to temp. 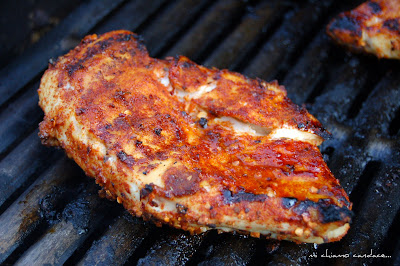 While the chicken was getting happy on the grill, I grabbed the ingredients for the barbecue sauce.....Ketchup, Dijon Mustard, Molasses, Apple Cider Vinegar, Sriracha, Brown Sugar and Onion.    Mixed all together in a saucepan and simmered over medium heat until it was reduced to about a cup, it became the most amazing barbecue sauce. 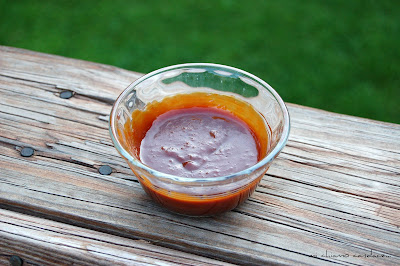 I set aside about a half of a cup and used the rest to brush on the chicken while it was still on the grill.    This recipe was fantastic.  It is definitely going to be something that we make time and again.  The chicken was unbelievably moist and full of flavor.  David's reaction was the true measure of this recipe.  He is not normally a huge barbecue fan; however, he loved this one.  His comment was that if we could make barbecue sauce this good, why would we ever buy it.  I have to say that I agree.  With a side of curry rice and some steamed broccoli, it was our favorite meal last week.  Summer is on its way out; but, please don't let it end without giving this recipe a try.  You can get the recipe by visiting Elly Says Opa! here.  You are going to love it. 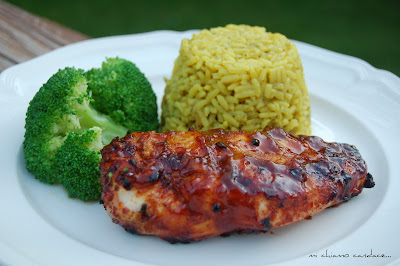 This post is being linked up
here for Make a Food "e" Friend,
here for Mangia Mondays and here
for Makin' You Crave Mondays.

Thanks so much for stopping by!  I hope you have a wonderful week!