Snow was falling and chili was on the menu.   Not that it has to snow for us to have it; but it seemed like the thing to do at the time.  You have to have a big pot of something hot on the stove when the weather outside is cold and nasty, right?

For the past few months, I've been really trying to be careful about what I've been consuming.  I'm trying to be mindful of how much I'm eating and get a handle on my portion sizes.  In order to do that, I've been counting Weight Watchers points.  I find it incredibly hard to count points when I'm cooking big pots of stew, soup or chili.  I'm a "throw a little of this and that in the pot" kind of cook and it's not easy to count points when you do that.

Some beautiful yellow peppers in my fridge were just the ticket for portion control.   While the pot of chili was perfect for the guys, I got creative with something for me. 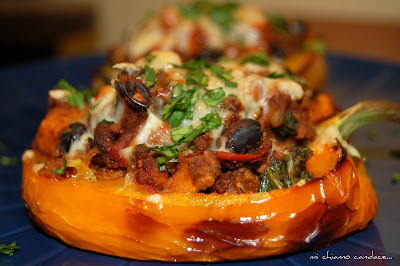 Slice peppers in half and scoop out seeds.  Lightly spray the peppers with oil and roast in a 400 degree oven until roasted. Dice sweet potato and spray lightly with oil.  Season with cinnamon, cumin, smoked paprika and sea salt to taste.  Roast in the oven with the peppers until tender and browned.

While the peppers are roasting, blanch kale for a couple of minutes in boiling water.  Drain, chop and set aside.  Lightly spray a skillet with oil and saute onion, garlic and bell pepper. Add turkey breast and taco seasoning and cook until turkey is done.  Add Jalapeno Salsa and fire roasted tomatoes. Stir until combined and heated through.  Remove from heat and gently stir in black beans, kale and roasted sweet potatoes.

Fill bell pepper halves with turkey mixture.  Top each half with 1 Tbsp. cheese.  Bake in a 400 degree oven until mixture is heated through and cheese is melted and browned on top.  Remove from oven and top with chopped fresh cilantro.

This post reminds me that it's time to make these again....

Have a beautiful day!