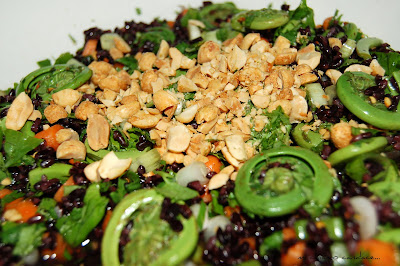 Have you had them?  From the comments that I have received on the blog and in email in response to my Wordless Wednesday post here, it seems that I'm not the only one out there who has been deprived of these wonderful little delicacies.  Moving to New England has opened up all sorts of doors for me to experience new things over the past six months.  Fiddleheads are, by far, one of my favorites.

Fiddleheads are the rage this time of year in New England. They are the tightly coiled frond of the Ostrich fern and given their name due to their resemblance to head of a fiddle. 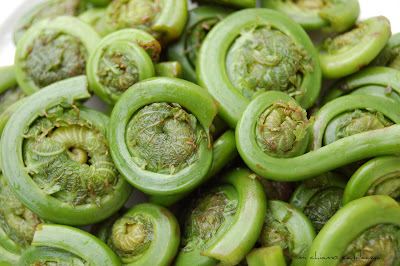 They are only curled up for a couple of weeks and then they uncurl into the beautiful fern leaves that we have all seen so the window of opportunity is short to enjoy them.   From what I've read about them, that they closely resemble some other ferns so you have to be careful which ones you pick.  My stepdaughter and her Chef Husband enjoy foraging for them so maybe they will take me someday so that I, too, can make sure that I grab the right ones.  I love the idea of picking things wild and eating them; but I am aware enough to know that I need to be particularly careful of that.

Fiddleheads are rich in Vitamins A and C so they are a very healthy option to add to your diet if you can find them available in your area.  I had been told that their taste most closely resembles that of asparagus so that I could prepare them and use them in the same way.  I read up on them that they were kind of bitter and that some people experience gastrointestinal upset if they are not cooked enough.   I probably cooked ours too long but with the amount of work that we have to get accomplished every day, I couldn't be too careful.  I cleaned them really good under running cold water and put them in a pot of boiling salted water for about 5 minutes.  I took them immediately out of the water and plunged them into an ice water bath while I prepared the rest of the meal.

David got the grill all set up for the first time since moving to New England and I had some chicken thighs that begged to be sacrificed on that altar for our enjoyment.  What better dish to go with grilled chicken than a salad.  Since we have a mild Asian food addiction and often use asparagus in those kinds of dishes, I decided to go that route.  I had some szechuan barbecue marinade in the pantry that needed to be used up so a dinner idea was born. 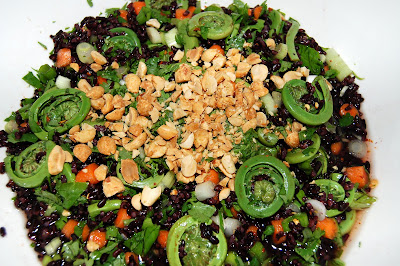 Last week, I had prepared a recipe for Sweet and Spicy Cucumbers that I had gotten here off of Renee's Eat.Live.Blog.  They were amazing!  It was one of those recipes that I've made in this time of transition that I have not had an opportunity to share with you.  No time for pictures....no time for blogging.

The only changes that I made to her recipe was to use rice wine vinegar instead of white vinegar and I had an English cucumber instead of the pickling ones.  I served it with pulled pork sandwiches and they were a huuuuge hit with the people here helping us move.

I had more of the forbidden black rice that I had told you about previously so I threw that with the fiddleheads, a few other veggies, peanuts and Renee's fabulous dressing and it was wonderful.

So without further adieu, I give you....


Asian Fiddlehead Salad
Adapted from Eat.Live.Blog
For the Salad:
Fiddlehead Ferns ( I have no idea how many that I had....maybe 1/2 lb.)
Baby Carrots, diced
Green Onions, chopped
1 cup black rice, cooked (you can use brown)
Chopped Roasted Peanuts, for garnish
Wash the fiddleheads gently under cool running water.  Add to a pot of boiling salted water and cook about 5 minutes or until they are done to your liking.  I have heard that they will possibly give you intestinal upset if you do not cook them long enough.  My mother-in-law says that she doesn't cook them very much and they are fine.
So...use your discretion here.
Once they are done, plunge in a bowl of ice water to stop cooking.
In a large bowl, combine cooked rice, chopped carrots, chopped green onions and the fiddleheads.
For the Dressing:
1/4 cup Cilantro, chopped
1 tsp. Salt
2/3 cup Rice Vinegar
3 Tbsp. Sugar
Sriracha, to taste (I used quite a bit as we like things spicy!)
Red Pepper Flakes, to taste
Mix the ingredients for the dressing together in a separate bowl. Pour the dressing over the salad and toss to combine. Sprinkle with chopped peanuts just before serving.  You can serve this immediately or refrigerate it to chill and serve it later.  If you serve it later, hold off on adding the peanuts until you serve it.  I served it immediately and it was delicious.  We had leftovers the next day and they were delicious, as well. 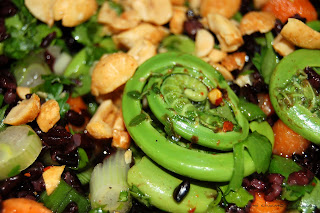 This post is being linked up here with the
Hearth and Soul Blog Hop, here with
What's Cooking Wednesday,
here with Miz Helen's Full Plate Thursday
and here for Seasonal Sundays
Thanks so much for stopping by!  I hope you are having a wonderful day! 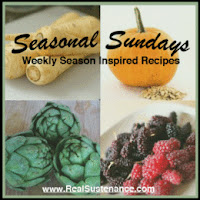